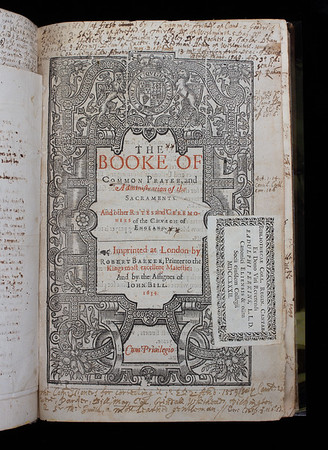 In the early years of Henry’s Church, new prayer books, introduced sporadically, were often theologically at odds. Not until 1549, during the reign of his son Edward VI, was a single service book – the Book of Common Prayer - determined for the use of the whole Church.

Until the authoritative version of 1662, the Book of Common Prayer was amended and revised frequently, and even banned twice – during Mary’s Catholic reign, and again during the English Civil War. This remarkable edition from 1634 is replete with annotations, sermon notes, commentaries and drafts of letters. It includes detailed notes on the various revisions of the Book of Common Prayer before 1662.

(One of seven images.)

Author: Church of England
Title: The booke of common prayer, and administration of the sacraments (London, 1634)
Shelfmark: N.1.31