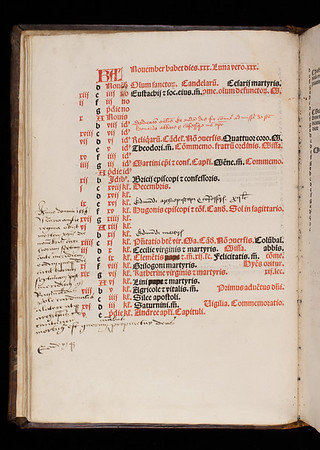 In this missal, an edition produced for the monks of the Carthusian Order, references to the Pope have been obscured with ink. By contrast, in the sixteenth century some saints’ days were added to the liturgical calendar by hand, as well as prayers for Thomas Becket. The book’s owner has added a marginal note to record Mary Tudor’s death, and the death mere hours later of the last Catholic Archbishop of Canterbury. Judging from his or her annotations, the book’s owner may have been a Catholic who practised their faith during Mary’s Catholic reign.

(In the year of our Lord 1558, Mary Queen of England died on 17 November at around six hours before midday. The same day at around seven hours after midday Reginald Pole, cardinal and Archbishop of Canterbury, also died. [on whose souls may God show mercy?])