Colour in Books: Between Decoration and Articulation - Queens' Old Library

Colour in Books: Between Decoration and Articulation 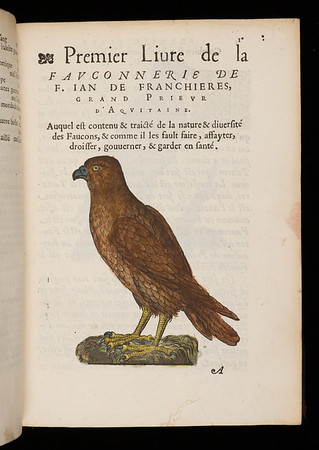 This first edition of works on falconry by Guillaume Bouchet features Jean de Franchières’ manual of falconry – a work famous since the Middle Ages – alongside a treatise by the Italian writer, Artelouche de Alagona, who was made Lord of Meyrargues by René of Anjou, father of Margaret of Anjou, the foundress of Queens’ College.
Franchières’ treatise is the first to appear in the volume and is accompanied by hand-coloured woodcut illustrations of falcons. These illustrations could have been the work of a professional watercolourist or a skilled owner. Either would have been able to use the descriptions of the birds to paint the illustrations with the appropriate colours. The preliminary work of the painter can be observed at the front of the volume, where he tried out his palette. This part of the book would have been covered later by pasting the front leaves against the inside boards.