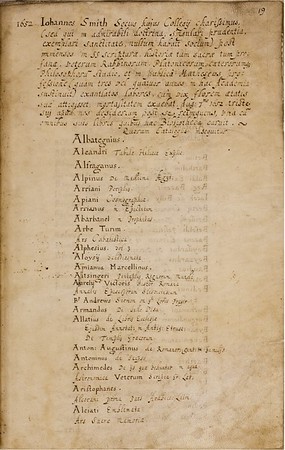 We know about John Smith’s bequest primarily from the Queens’ College Donors Book. Here we see just the first of 17 pages that list Smith’s 630-book bequest. As the third biggest gift in its history Smith’s bequest must have made a huge impact on the library when it arrived. Although some of the books contain Smith’s initials, his general reticence in marking his books makes this Donors Book the only record of which books were indeed owned and bequeathed by him.

The Donors Book itself was first instituted in 1631. Although primarily a record of 17th-century gifts, the volume also provides a retrospective record of gifts dating back to 1562 (similar donors’ books were first drawn up by other Oxbridge colleges in the 17th century). Alongside the need to acknowledge the generosity of donors, there was a clear aspiration to record and map the on-going history and development of Queens’ College Library as evidenced in bequests such as that of Smith.