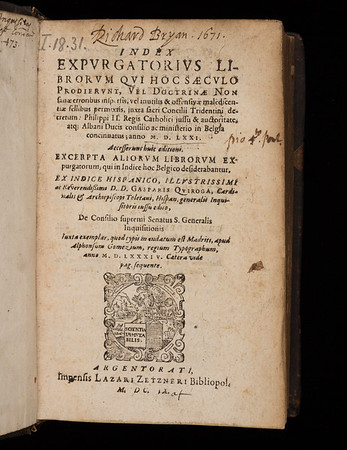 Erasmus' works proved controversial, not least on account of their criticisms of the Catholic Church. It was owing to this that all of his works were included in the Catholic Church’s Index of Forbidden Books (the Index librorum prohibitorum) published in 1555. Following widespread protest at this decision, the Index for 1559 only included particular Erasmus books, the remainder of his output being forbidden only until such time as the theologians of Paris or Leuven had published a list of passages to be expurgated from them. Thus the Catholic Index expurgatorius, published in Antwerp in 1571, listed questionable passages to be deleted from those Erasmus works that weren’t forbidden in their entirety. Amongst those may be found many sections from Erasmus’ New Testament and its annotations.

Queens' copy is a 17th century reprint of the Index expurgatorius of 1571 that was signed by the 17th century Queens’ fellow Richard Bryan and many sections from Erasmus’ New Testament and its annotations.