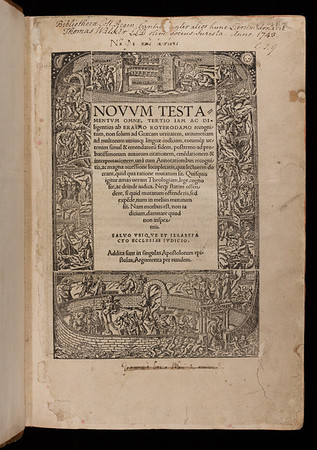 Entitled Novum Testamentum, this is the third edition of Erasmus’ New Testament, first published under the title Novum Instrumentum by Johann Froben in 1516 (at which time it constituted the first published Greek edition of the text). By including the Greek text, Erasmus hoped to show his readers how he had arrived at his updated Latin translation. A further hugely significant innovation was to include detailed annotations that explain the editorial decisions Erasmus had made. Following the success of his first edition Erasmus issued a further four corrected and amended editions. Amongst the many to have been influenced by the Novum Testamentum can be included Martin Luther and William Tyndale, both of whom drew on Erasmus in their ground-breaking translations of the Bible into their own languages.