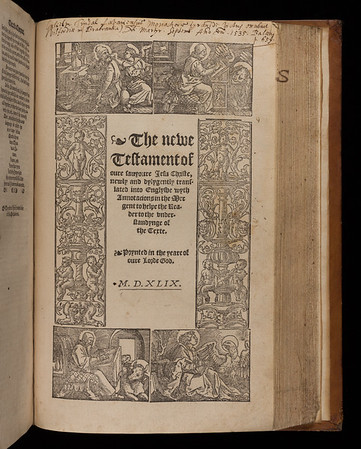 As well as being the first mass-produced Bible to be published in English, Tyndale's Bible was the first printed publication to make avaliable in English the New Testament. The latter was translated from the Greek of Erasmus' third edition of the Novum Testamentum (1522). Tyndale was strongly influenced by Erasmus' notion of 'personal faith'. By translating the Bible into English, Tyndale sought to make the scriptures directly avaliable to a wider, less-educated audience that lacked knowledge of Latin.

First published in 1537, this edition of Tyndale's Bible is known as a 'Matthew Bible' on account of the fact that it was edited by John Rogers whose pen name was Thomas Matthew. In addition to the New Testament of Tyndale, it includes all that he managed to translate from the Old Testament prior to his execution in 1536 at the order of Henry VIII on charges of sedition. The remaining half of the Old Testament that Tyndale failed to complete is based on the translation of Myles Coverdale (1535).