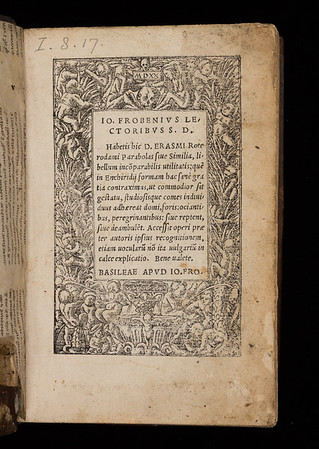 Parabolas sive similia is an educational treatise first published by Erasmus in October 1514, shortly after his arrival in Basel from England. This work was a by-product of his ongoing revisions of the Adagia. Instead of collecting proverbs as he had done for the Adagia, Erasmus chose this time to collect Greek and Roman aphorisms, illustrated by comparison with facts from history, or experiences of life or from the world of nature. By examining examples drawn from Greek and Roman literature the 16th century school boy was enabled to apply the principles of classical rhetoric to his own writing and speech.