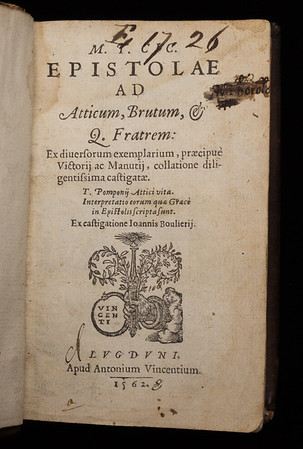 For many modern day historians, the 14th century Renaissance began with the rediscovery by the Italian humanist Petrarch of a hoard of correspondence that had belonged to the great Roman orator, politician, and philosopher, Marcus Tullius Cicero.

This 16th century printed edition includes his letters to the infamous Marcus Junius Brutus. Many of these are serious compositions that provided humanist scholars with important historical information and key exemplars of Cicero’s elegant Latin style. However, the letters written to his younger brother Quintus and to his close friend Titus Pomponious Atticus were written with an apparent freedom, complementing the whole with frank descriptions of his everyday life.