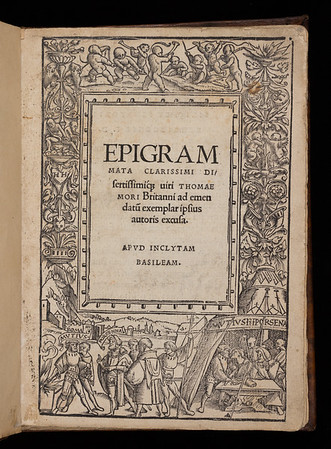 This is the first complete and separately issued edition of Sir Thomas More's Latin and Greek epigrams, published by John Froben in Basel in 1520, from manuscripts collected by his friend Erasmus. It was originally printed by Froben as part of the third edition of More’s Utopia, 1518.

The Epigrammata was an inherently humanistic endeavour, comprising mostly Latin poems translated from 10th and 14th century Greek sources. Also included are epigrams composed by Thomas More himself, some of which explore the problems of tyranny, revealing his profound unease with the corruption often associated with kingship. More also poked fun at Germanus Brixius, a French humanist with whom More had a literary feud until Erasmus intervened to calm the situation. The first five of More’s epigrams were written for the coronation of King Henry VIII in 1509. More, the man whom Erasmus had come to consider as his closest friend, was executed by Henry on 6 July 1535 for his opposition to the royal divorce and the royal supremacy (whereby the king became supreme head of the Church).