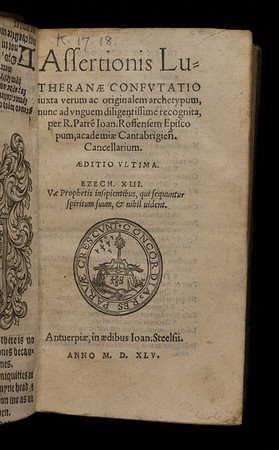 In 1526, John Fisher, Bishop of Rochester, Chancellor of the University of Cambridge and former President of Queens’ preached a sermon against Martin Luther outside St. Paul's Cathedral at the command of King Henry VIII. By then Fisher was the foremost theologian in England and his reputation had been won, in part, through the publication of conservative texts such as Assertionis Lutheranae confutatio. The sophistication with which this work countered the theology of the German reformer quickly established its position as a leading tool in the opposition to the Protestant cause. On 22 June 1535, John Fisher, the very same person who had invited Erasmus to Queens’ was beheaded on grounds of treason, having rejected King Henry’s status as ‘Supreme Head of the Church of England’.