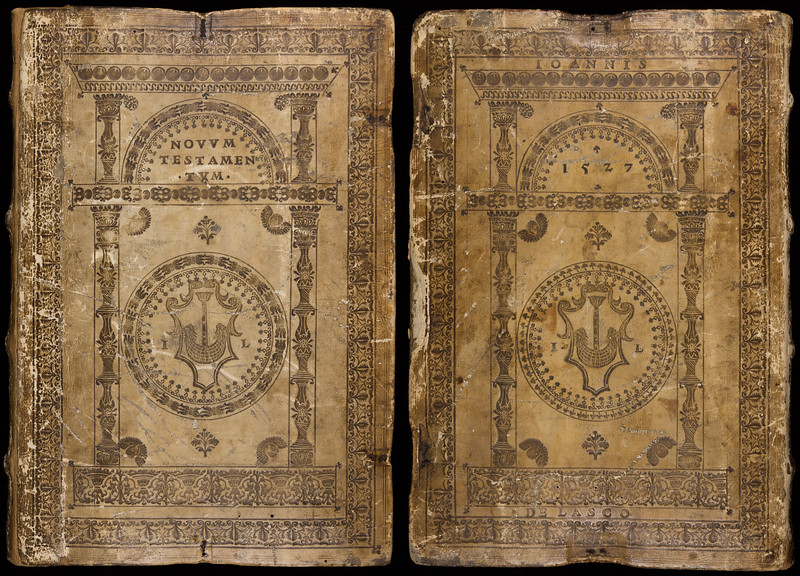 One of the highlights of our 'In Praise of Erasmus' exhibition (Sept-Dec 2016), was the third edition of Erasmus' New Testament (Novum Testamentum (Basel, 1522)). With its Greek text drawn from early sources and 'purified' Latin translation, the initial publication of this work (Basel, 1516) is  now remembered as a key event in the Reformation. The Queens' copy is of special interest for a range of reasons, all of which relate to its armorial binding and provenance history.

The armorial binding was created especially for Jan Łaski, also known as Johannes a Lasco, a Polish humanist and reformer (see left). Having grown up in Krakow where he received education from  his uncle (Jan Łaski the Elder, Archbishop of Gniezno and head of the Polish church), Łaski continued his studies in Italy.

A great admirer of Erasmus, Łaski met with Erasmus on two occasions. The first of these was during a brief stay with Erasmus in Basel when Łaski and his brother were engaged in a diplomatic mission to Paris. The strong impression made by Erasmus on Łaski is reflected in remarks subsequently made by him in a letter to Heinrich Bullinger: 'Erasmus made me engage myself in theology, indeed, he introduced me to true religion for the first time.' During a later meeting between the two men it was decided that Łaski would buy Erasmus' library after the scholar's death.

The remarkable decoration of Łaski's copy of Novum Testamentum reflects both the value Łaski placed on it as a sacred work of scholarship, and his deep regard for Erasmus himself. Its initial ownership by Łaski is indicated by the presence on both covers of Łaski's  initials and his Polish coat of arms (known as a Korab coat of arms).

Both the head and foot of the back cover also bear Łaski's full Latin name.

In addition to the ornate binding Łaski also personalised his copy by writing his name on the title page and an inscription in Greek.

Perhaps the most interesting aspect of this volume is the numerous marginal notes entered in a very fine and neat humanistic hand by Jan Łaski.  Mainly written in Latin, these record Łaski's thoughts on Erasmus' translation, and offer references to other authors deemed relevant by Łaski. 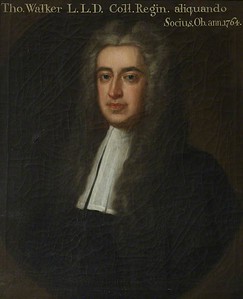 We know little concerning the book's history following Łaski's death and prior to the eighteenth century. Its presence at Queens' is explained in a donor's inscription on the title page, which states that it was part of a book donation given to Queens' in 1743 by a former Queens' fellow and fellow of the Royal Society, Thomas Walker.